We all know Kurt Cobain as the main brain and all around awesome leader of the band Nirvana, but he was not only a musical artist, he was a visual artist too. Kurt had expressed his interest in going to art school throughout his life and he dedicated many hours to making comics, paintings, drawings, sculpture, collages, cover art for Nirvana, and even designing the band’s music videos. His work reflected ideas of surreal situations that were inspired by death, carnage, biology, and pregnancy. Although some subjects seem dark to the average viewer, the meanings reflect his curiosities which are often miscommunicated as Kurt having a dark and twisted personality. 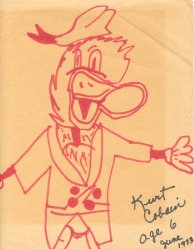 Kurt displayed in his childhood a talent for art by drawing caricatures of Disney characters. In his teenage years, Kurt enjoyed art class the best. He applied himself in art because of his passion and natural talent. Kurt would make art from any material whether it be conventional or unconventional, he also delved into filmmaking/video art. Kurt and his friends from high school liked to make horror movies.

Drawing by Kurt in 5th Grade

Below is a horror film by Kurt, Dale Crover, and Krist Novoselic.

Kurt opposed Reaganomics and in high school drew a caricature of him, he also drew punk rock inspired figures and monsters all of which had surreal qualities. 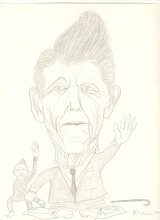 Surreal Drawings by Kurt while in High School

He was the dominant decision maker and creative mind over Nirvana’s album art, promotional material, and music videos. He often would get frustrated when directors would try to morph his ideas into something opposite of his vision and promoted more mainstream friendly ideas. Kurt being an artist wanted his art to be his way, he had stories he wanted to tell with these videos. For example, Smells Like Teen Spirit was re-edited by Kurt after it was completed because he was dissatisfied with certain aspects of it. The video reflected the bands personality and this image of chaos. The video featured a high school pep rally gone crazy, revolution-like. The most intense part is the Janitor, because in case some readers do not know, after Kurt dropped out of high school he took a job as a Janitor at the same school…I just want everyone to think about that for a moment… 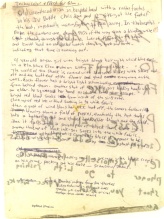 Kurt’s most notable music video he created was, Heart-Shaped Box. This was his pride and joy during the creative process, his designs were very specific. The original director’s cut of the video was not used for the official release. When the video was released it ended up being criticized by some conservative viewers as inappropriate for television due to specific controversial symbols; the directors cut does have even more symbolism, so it could have been a decision based on if it would be allowed to be shown or just a visual conceptual choice to edit the video. After 20 years, the original version of the video was released and the video makes a little more sense because of the increased imagery. The edited version released only tells part of the story envisioned by Kurt, one can get the gist of what is going on, but when one views the original the message is full and clear (at least to me). The fact that people criticized this video because of content seems so outrageous now because all we see on MTV is half-naked exploited women and there is none of the kind in any Nirvana video. The band respected women and of course was anti-corporation etc. Despite having an edited version released and criticism, Kurt was very happy with the video and it went on to win various awards and earned them much praise from the music business. Here is a link to an interview with the Director of the video, Anton Corbijn, How Nirvana Shot the Heart-Shaped Box Video.

Kurt doodled many images of the band, in the early years he would fantasize album designs, advertisements, their “catch phrases”, and logos. He continued this throughout their career. Some of his drawings were silly and humorous and other creations turned into real materials for the band, for example, one of his paintings was used for the Lithium single.

Kurt’s Drawing of the Band ( Krist, Kurt, and Dave)

Artwork and design he did for Nirvana with the most visual power and reach were the album covers for Incesticide and In Utero. The cover of Incesticide is a painting by Kurt and the In Utero pamphlet art is a large sculptural arrangement of fetal models, flowers, and human body models which was inspired by Courtney’s pregnancy and his curiosity in this part of anatomy and physiology.

Kurt’s Painting for the cover of Incesticide 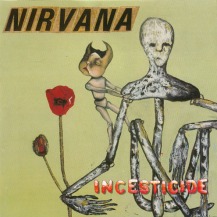 Photo of Kurt’s sculptural collage of flowers, fetuses, and human body models for the In Utero album

Courtney and Frances next to the sculptural collage for In Utero 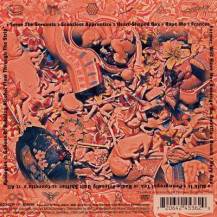 In Utero Back Cover with photo Kurt took edited

Kurt’s Fine Art side is what influenced his commercial work, but was free of restraint and allowed him to express himself as creatively as he wanted. He would construct sculptures out of old baby dolls and other various materials such as toys, posters, photos, cartoons, anything he felt was intriguing and would enhance a vision he had. One of my personal favorites is a sculpture of a suitcase with a white cloth holding inside a shattered Madonna figurine and Birth Announcement Dolls, it’s both surreal, haunting, and beautiful at the same time. His paintings also feature this haunting feeling with skeletal figures and bright high chroma colors to dark black and whites. Kurt’s skeletal figures could hint at his reflection of himself, Kurt was very thin and had a hard time gaining weight due to a stomach condition. He was self-conscious about his being thin, so he used to wear many layers to give the illusion that he weighed more. While I cannot conform this is the true meaning behind these figures, I do think it is a good theory to observe and discuss. In addition to sculpture, collage and painting, Kurt also loved to draw comic strips. The Mr.Moustache comic inspired the song Mr.Moustache which appears on the album Bleach. 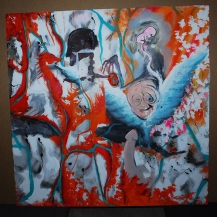 Painting Featuring Surreal Imagery of a Fetus, Penis, and Various other Images

Painting with Skeletal Figure and Seahorse 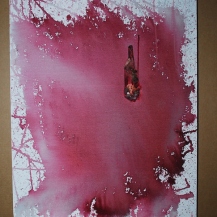 Painting of a Figure in a Field of Flowers 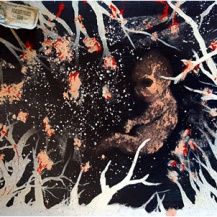 Painting with a Fetus

Painting with a Woman’s Face and Skeletal Figure

Painting of a Skeletal Figure

“Many Moods of Kurdt Kobain” Collage

I do ballet, play the guitar, write songs. My favorite bands include: No Doubt, Weezer, Space Twins, The Relationship, Radiohead, R.E.M., Sublime and many many more! View all posts by CherryBlossom

Sorry, I haven’t posted in awhile, but my career in screenwriting is my top priority at the moment. I was in Oaxaca for a film festival then stopped in Mexico City on the way back! Yes, my dream of visiting @museofridakahlo came true! 💕🇲🇽#fridakahlo #oaxacafilmfest #oaxaca #mexicocity #mexico #vivamexico #screenwriter #artist #filmmaker #girlpower #casaazul #museofridakahlo #coyoacan
Send me your work or website, nothing bigoted or sexist. Let’s do this!!!! #underdog #emergingartists #contemporaryartists #rejectedart #rejectedartists #diamondintherough #undiscovered #artists #artsharing #artiscool
Underexposed will be back with new Emerging Artist features soon! Stay tuned for all the new things too come. Sorry to have been dormant, but as an artist myself, I had been caught up with personal projects and happenings, but I'm getting back on track! Stay tuned! Much Love, Johanna @doll_legs #emergingartists #emergingartistblog #underexposed #johannafalzone #artistfeatures #sumbityourart #acceptingsubmissions
Mini Girl01 2016 Hand embroidery on fabric 8″ x 10″, Jessica So Ren Tang #jessicasorentang @jessicasorentang #fiberart #fabricarts #embroideryart #figureart #womeninart #emergingartist #underexposed #minigirl #asianculture #floralembroidery